Fire Eyes in the Dark No one ever asks the right questions.

Hello, again. I’m back from devotedly re-writing From the Dark and frameworking the second book. And in the process of doing so I started to reconsider their names again. I, as a reader, like the covers and titles of books to draw me in and get me interested, and am quite reluctant to chose something with either a stupid title or cover (“Thirsty”  being a good example of both, for instance, but I haven’t read it so I wouldn’t know if the process is working or not). So I’m fiddling with the title almost as much as the actual guts of the project. Speaking of said guts, I’ve been procrastinating the actually re-writing as much as I can. I’ve been busying myself by doing other things, like downloading a good copy of Queen of the Damned, sorting icons, making a new cover, organizing my character bios, finding quotes for each, etc. I even sorting my music into different playlists based on mood. All of my music. So, basically doing nothing that really needs to be done.

My mom would certainly be mad at me for knowing exactly how little work I’m doing.

I’ve been really trying though, and that’s something. I have random spurts of inspiration where I go and write as much as I can as quickly as I can get it down (and usually it’s pretty good stuff, too). Then, when I have no more willpower to do that, I usually go and try to get the setting as detailed as I can manage. Thank god for FARP, or else I’d be totally screwed. Then, if I really want to force inspiration out of myself, I listen to my nice new “Videos” playlist, which has all of the songs I’ve mentally made into music videos since I’ve started writing. That’s been helping a little bit.

We had a snowday today, thank god, so now I can get to writing. Why am I on here, you ask? Probably because I’m subconsciously procrastinating. And I’ve got to do the homework I didn’t do yesterday… At this rate, everyone will be lucky to see my book this year.

Logos, Pictures and other colorful subjects

Okay. I haven’t been on in god knows how long but I have an excuse (no I don’t, but just smile and pretend I know what I’m talking about.) and lots of rants. First off, I worked on a new cover for my books. Just an idea then I’ve been working on. Nothing to serious. Might blend it into the sequel for Werewolf Games though.

Not titled. I thank all of the wonderful people at photobucket for allowing a maniac like me on the website to make these things for. And plus I have absolutely no idea where I found these (I don’t write the names down) and even if I did, I know photoshop well enough to know that I’ll never know who to thank anyway. So, if you drew one of these- whoever you are- I thank you. The girl up on the top laying backwards, she reminds me of the girl in the top left (blurry I know, but best I can do) and so, they are supposed to be the same person. Kind of. But for all normal purposes, yes, it’s the same girl. The one on the bottom left in the water is Morrigan. I stick her there after I realized that the characters could totally fit into the sequel I’m planning. (And in case you didn’t know, Morrigan was the main character in The Werewolf Games) The punk girl in the bottom right hand corner, her name is Rymona and to put it lightly she’s a bitch. But she’s a cool bitch in any case. (Happens to be my favorite character actually) The one next to her in the long dress is another girl named Valerie (But that’s not what people call her, her nickname’s Reed), and the one laying on the stars is Raven. The cool chick. The heroine (Funny how the main character isn’t the heroine.) and the guy in the upper left, his name is Chase. Or was. Or maybe still is. I haven’t decided yet. It’s up for debate.

Anyway, I was oober bored on Easter so I sat there and made this. And it’s not one of my best one’s either. No comparison to Stripped of Darkness: 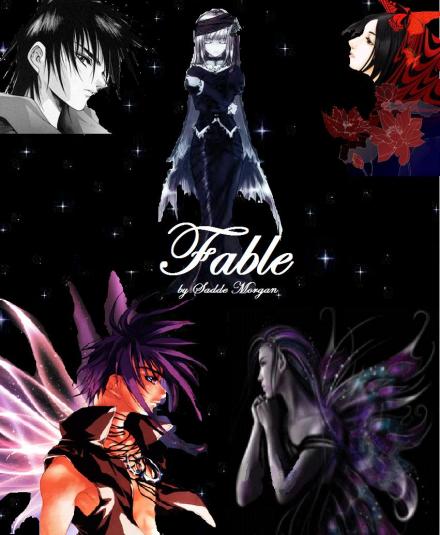 Or Reclusive (Which honestly needs to get editied):

Or even the first Moonlight Reign (Back when it was children of Reno):

Which also needs editing, but I guess that’s life. And keep in mind that Stripped of Darkness (Reclusive is it’s sequel) was the first one I did, while Moonlight Reign was the second. And Fable being the latest before throwing together the top one.Speaking of pictures I need to go and find some new pictures of anime characters. I’m percariously close to using the same characters more than once. (I probably already did on some of the other ones too) I sure spend enough time there, looking for more to add to my one million icons collection (I sort them into the different series’ they apply too. No dissing, Lily does it too.) Anything really to avoid writing more. I’ve hit a dead end again, and I want to work on Reclusive again like I’m supposed to be doing. And… Jeez, did I really do that bad a job of covering up Caleb’s shirt? [stares in shock] ouch. Thank god I’m not using that one anymore. Where is that anyway? I’ll have to go search my computer again… Anyway, you’ve gotten your update and I don’t feel guilty anymore. I’d better go work on elipsis (more on that later) and I’ll get back to being an idiot later.